Drinking an anti-inflammatory smoothie is a fast and effective way to reduce inflammation, which is a leading cause of many health conditions such as heart disease, arthritis, cancer, and Alzheimer’s.

Reducing inflammation in your body helps to boost your immune system and build up your natural defense to fight against disease-causing agents.

The Role of Inflammation in Your Body

Inflammation is our body’s natural defensive response to external threats such as infections or toxins.

When your body detects injuries, it triggers a chemical response to release antibodies or increase blood flow to the injured area to attempt to heal itself.  This acute inflammation process typically completes in a few hours to a few days.

Chronic inflammation happens when this defensive response lingers in the body, leaving it in a constant state of alarm.

Over time, chronic inflammation may have a negative impact on your tissues and organs and can lead to weight gain and diseases (source).

Causes of chronic inflammation include:

Diet also plays a crucial role in your body’s inflammatory response.  Foods that can increase inflammation in some people include: 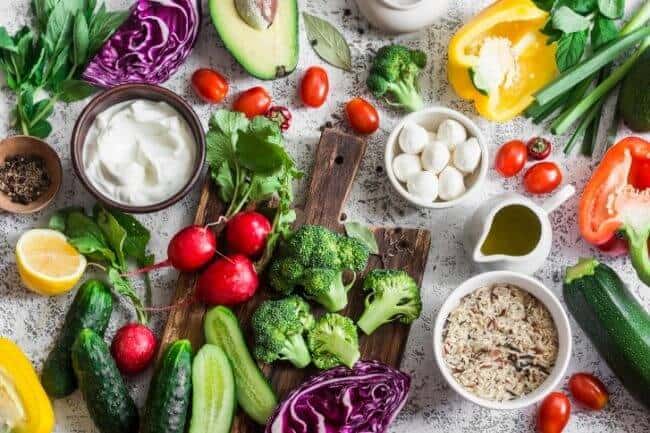 There are a variety of foods that naturally possess anti-inflammatory properties.  Many of these foods are found in the Mediterranean diet.

A study in 2018 found those following the Mediterranean diet had lower markers of inflammation (source).

These high-antioxidant food sources include:

This anti-inflammatory smoothie recipe marries together fruits, vegetables, and spices to make a delicious blend that also helps to reduce inflammation:

Turmeric is an amazing healing spice that has been used in both traditional Chinese medicine and Ayurvedic medicine for thousands of years.

Curcumin, its key bioactive component, has been extensively studied for its antioxidant and anti-inflammatory effects.

A study found curcumin’s potent anti-inflammatory and anti-arthritic properties to be just as effective as drugs for alleviating symptoms of osteoarthritis (source).

Our body does not naturally absorb the curcumin in turmeric well, but taking turmeric together with black pepper enhances the absorption of curcumin by 2000% (source)!

Gingerol, shogaol, and paradol are active components in ginger that have anti-inflammatory properties.

Studies have found that ginger suppresses the formation of the pro-inflammatory cytokines that cause inflammation in your body.  These cytokines are linked to chronic inflammation (source).

Cinnamon has been highly regarded for its powerful medicinal properties for thousands of years.

Studies have shown it to have potent anti-inflammatory activities that can help to lower your risk of chronic diseases (source).

There are two main types of cinnamon:

Not all cinnamons are created equal.  One important caution on Cassia cinnamon is its high coumarin content, which can potentially cause damage to the liver in large doses.

Leafy greens like spinach, chard, turnip greens, beet greens, and collard greens comprise the right amount of vitamins and other essential nutrients that are known to minimize chronic inflammation.

Pineapples are low in calories and packed with vitamins and minerals such as vitamin C and manganese.

It contains a group of digestive enzymes called bromelain that may reduce inflammation due to trauma, surgery, arthritis, or osteoarthritis (source).

Banana is a nutritional powerhouse packed with potassium, vitamins B6, and C.

A study found banana to be potentially as effective as ibuprofen in easing inflammation associated with a workout (source).

Bananas also contain high amounts of rutin, a compound that has antioxidant, anti-inflammatory, and anti-cancer properties. 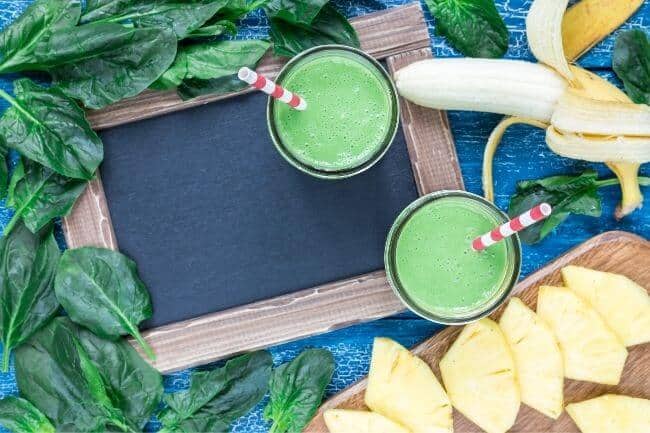 Add all ingredients to a blender, starting with the leafy vegetable, and blend until smooth.  Add more liquid if too thick, or add ice to thicken.

Adding the 4 spice powders every time may feel like a lot of work.  I found a great shortcut to get all of these spices plus even more superfoods by simply adding one teaspoon scoop of this anti-stress and anti-inflammatory superfood mix.

Not only does this superfood powder include the four potent anti-inflammatory spices I mentioned above, but it’s further boosted with:

It’s a fast, easy, and delicious boost your anti-inflammatory smoothie!  Just replace the spices section under ingredients with a single scoop of this superfood powder mix and you are done.

===> Get an extra 15% off of your green superfood mix powder by using the code SPICEGREEN at checkout!!

If you enjoyed this anti-inflammatory smoothie recipe, and are looking for more green smoothie recipes to gain energy and lose weight, sign up for the FREE Green Smoothie for Weight Loss Cheat Sheet below to get started today!