8 Amazing Turmeric Health Benefits and How To Use It Today

A wonder spice that has been used in both traditional Chinese medicine and Ayurvedic medicine for over 4,000 years, the amazing range of turmeric health benefits makes it much more than just a flavoring agent for curries or coloring agent for mustard and yellow rice.  Its key bioactive component is curcumin, which is packed with healing properties from naturally treating arthritis to keeping our brains sharp.

It’s important to note that our body does a poor job of absorbing the curcumin in turmeric. However, if you combine black pepper with it, the piperine in black pepper can enhance the absorption of curcumin by 2000% (1)!

Check out these eight reasons to add turmeric along with black pepper to your diet:

The curcumin in turmeric has been shown to block fat cells (2) from mice fed a high-fat diet. In the study, the mice were split into two groups, with one group consuming the human equivalent of one to two spoonful of turmeric daily. After 12 weeks, the curcumin group weighed an average of 10 percent less than the non-curcumin group.

Moreover, turmeric has demonstrated its ability to turn ‘bad’ white fat cells into ‘good’ brown fat cells (3). The primary function of white fat cells is to store energy for future use as adipose tissue. Brown fat cells, on the other hand, are capable of diverting a significant amount of dietary caloric energy into thermal energy and increase your metabolism.

Adding turmeric to my daily diet was one of the key changes that helped me to lose 9 inches of my post twin pregnancy belly.

A study has shown that the curcumin from turmeric helps to inhibit the excessive growth of the uterine tissues, which aids in controlling uterine fibroids (4).

I’ve had a chestnut-sized uterine fibroid for 6+ years. Nearly four months after I started adding turmeric to my daily diet, the fibroid was nowhere to be found during my regularly scheduled checkup with the doctor!

The curcumin in turmeric can reduce the pain and discomfort associated with premenstrual syndrome. A clinical trial was conducted on women suffering from PMS (5). The women were divided into two groups, where one group received curcumin capsules and the other placebo before and after menstruation, and the result was that the curcumin group recorded a significantly lower severity of PMS.

A friend of mine experienced pain and discomfort associated PMS every month since her menstruation started, even to the point where she needed to take sick days from work. After she started drinking turmeric ginger tea per my suggestion, she happily reported that it greatly reduced her PMS symptoms!

Turmeric is used in ancient Ayurvedic remedies for skin disorders such as acne, eczema, and psoriasis (6). Clinical evaluation of turmeric for topical pastes applied directly to the affected skin area has shown it to be a promising source of eczema treatment (7).

My son developed severe eczema at about 3-months-old. As a mother, it was heartbreaking to watch him struggle with the constant itching and discomfort. While topical steroid creams and oatmeal baths helped to alleviate the symptoms, it didn’t seem to address the root cause and his eczema persisted. A visit to the allergy doctor did not identify any food allergy.

I started to research Eastern and home remedies for eczema and found that the anti-inflammatory properties of turmeric have been used to treat eczema. Adding sprinkles of turmeric and black pepper to his rice, pasta, and eggs not only brightened his food yellow but also significantly improved his eczema. 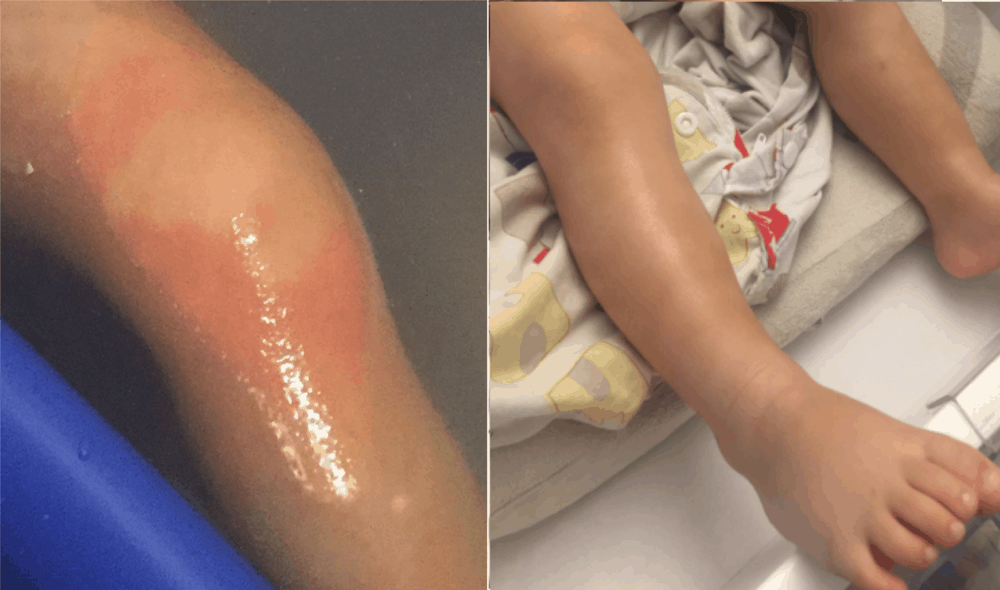 Turmeric health benefits for eczema: Left photo shows eczema rash taken in June of this year. On the right is a recent photo of the much-improved skin after consuming food cooked with turmeric and black pepper on a regular basis.

Curcumin possesses potent anti-inflammatory and anti-arthritic properties and has even been shown to be better than drugs for alleviating symptoms of rheumatoid arthritis (8). More importantly, the study established that the curcumin treatment was found to be safe and without adverse side effects.

A study conducted on patients with knee osteoarthritis using turmeric extracts showed that there was an improvement in pain levels when walking over 100 meters up and down stairs, and this result is comparable to patients that took ibuprofen for osteoarthritis within the same study (9). In fact, the turmeric group reported less pain when walking up the stairs compared to the ibuprofen group.

Alzheimer’s symptoms caused by inflammation and oxidation are reduced by curcumin’s powerful antioxidant and anti-inflammatory properties. Curcumin was found to have significantly lowered oxidized proteins and proinflammatory cytokine that were elevated in the brains of mice with Alzheimer’s (11).

8. Turmeric can fight against cancer

There are actually abundant researches done on curcumin’s incredible ability to target and ‘smart kill’ cancer stem cells to prevent the growth of tumors and the spread of cancer at the cellular level (14). Curcumin has laboratory-proven capabilities to impede blood supply to cancer cells, induce tumor-suppressing genes, stop the spread of cancer throughout the body’s organs and prevent the regrowth of cancer stem cells. Many cancer types were studied, including breast, lung, stomach cancers and leukemia (15, 16, 17, 18). There are also inspirational stories of people healing from cancer using turmeric and other cancer-fighting spices (19).

Should you take turmeric supplements or add it to your food?

In an experiment on human volunteers led by Dr. Michael Mosley, the subjects were divided into three groups and were given either a placebo, instructions to consume a teaspoon of turmeric every day for six weeks mixed in with their food or consume turmeric supplements of the same amount (20).

The results of the placebo and the turmeric supplement group were surprisingly similar and disappointing, but the group who mixed turmeric powder into their food saw substantial changes. One speculation is that adding fat or heating up the turmeric makes the active ingredients more soluble, which makes it easier for us to absorb the turmeric.

I was able to achieve my aforementioned turmeric health benefits by adding it along with black pepper to food, without taking any turmeric supplements.

Having said that, I also understand the ease and convenience of taking a supplement pill, and also the aversion to the taste of turmeric for some people. A turmeric and black pepper supplement that is popular with excellent reviewson Amazon is this one.

How to jump-start your day with this power spice?

Warm lemon water is touted as the perfect morning drink with many benefits from boosting the immune system to weight loss (21). Spice up that lemon water and turn it into a fat blocking Ginger Turmeric Tea to kickstart to your digestive system for the day!

If you enjoyed this article and are looking for a blueprint for natural weight loss with a structured diet plan and recipes, check out my 21-Day Slim Down Challenge to learn how I lost my first 10 pounds in a month without working out or starving myself, using spices and healthy greens that has been used for thousands of years in traditional Asian medicine to maintain a healthy body and weight!

The concepts that you’ll learn from the challenge will help you make the necessary changes in your diet and your lifestyle, and easily maintain your healthy weight beyond the challenge.

You can click here to get started with YOUR 21-Day Slim Down Challenge today!

Sharing is caring! What turmeric health benefits have you experienced and how did you use it?

Welcome to Spices & Greens, where I help moms to eat clean and lean and lose the “mommy belly” without deprivation.