Did you know that the benefits of cinnamon extend far beyond its use as an everyday spice?

A sweet, warming spice with a long history for both its culinary and medicinal values, cinnamon is the brown bark of the cinnamon tree and can be found in a dried tubular form known as a quill or as ground powder. 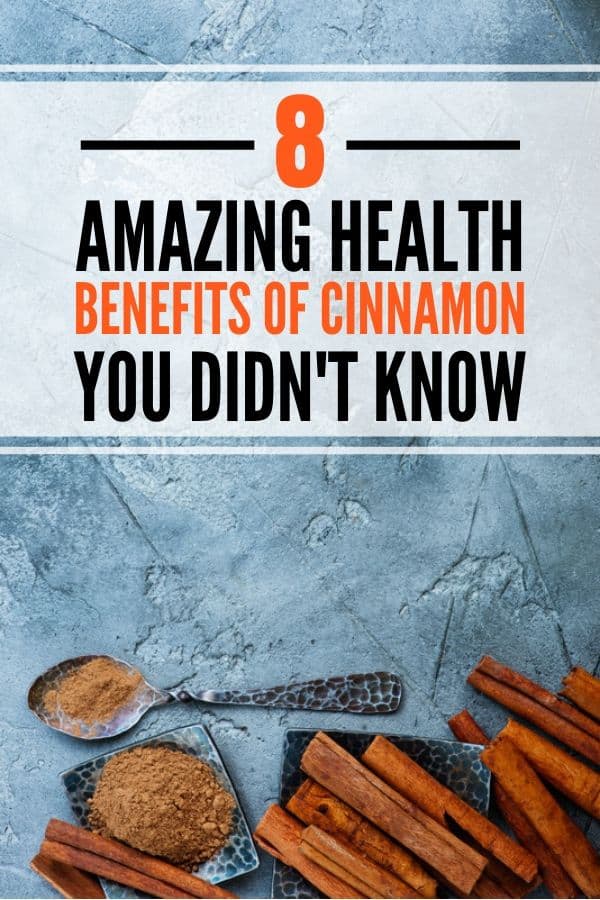 There are two main types of cinnamon:

Rich in manganese, iron, calcium and fiber, the health benefits of cinnamon range from weight loss, boosting your brain functions to fighting the common cold and even protecting your dental health!

Cinnamon is well known for its ability to control blood sugar. It can also simultaneously increase insulin levels in the body by imitating the biological activity of insulin to increases the metabolism of glucose (1). Since high blood sugar levels can lead to increased storage of fat by the body, cinnamon helps prevent this increased fat storage and therefore helps you lose weight.

Cinnamon has the ability to slow down the rate at which the stomach empties into the intestine by about one-third, thereby reduces the spike in blood sugar that causes weight gain. And because food passes out of the stomach more slowly, you will feel fuller for longer and less likely to overeat, and thus further your weight loss efforts. Cinnamon also helps the body to process carbohydrates more efficiently and this helps you to shed a few pounds (2).

A study on mice also showed that Cassia cinnamon was particularly effective in reducing abdominal fat (3). Both Ceylon and Cassia cinnamon were power spices that helped me to lose 9 inches off my post twin pregnancy belly and 28 pounds! 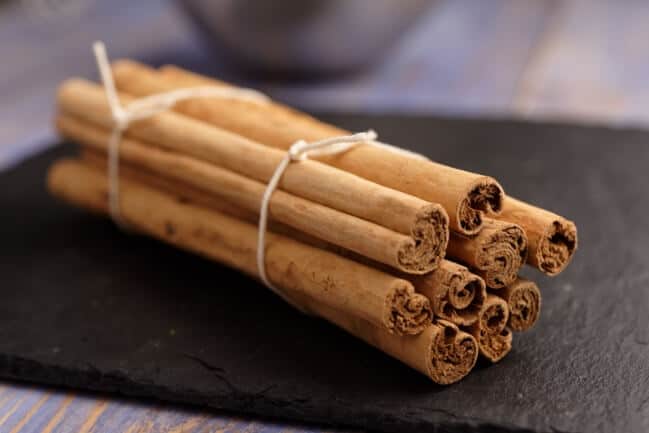 Cinnamon is loaded with powerful antioxidants that protect the body from oxidative damage caused by free radicals and slows the aging process. In a study that compared the antioxidant activity of 26 spices, cinnamon was deemed the clear winner and beat out other powerful herbs and spices including garlic, thyme, and oregano (4)!

Cinnamon provides many benefits to defend our bodies from illness with its natural anti-microbial, anti-biotic, anti-fungal and anti-viral abilities. It is used in many cultures to naturally help fight harmful infections and viruses. Cinnamaldehyde, the magic component of cinnamon, shows positive effects in helping to fight all kinds of respiratory tract infections caused by fungi.

In India and Europe, cinnamon has been traditionally taken as a warming spice for “cold” conditions often in combination with ginger. It is also a traditional remedy for aching muscles and other symptoms of viral conditions such as cold and flu.

You can soak some cinnamon sticks in water for an easy and refreshing drink. The anti-bacterial properties of cinnamon soothe your throat, and its warming properties increase blood flow and blood oxygen levels to help you fight infections.

I give my toddler twins cinnamon water during the cold and flu season when they need a boost to their immunity. Cinnamon along with using homemade bone broth recipe and apple cider vinegar helped us to keep the cold bugs at bay during the last cold season.

Did you know that just smelling the wonderful aroma of cinnamon can boost brain activities? A study found that chewing cinnamon-flavored gum or just smelling cinnamon enhanced study participants’ cognitive processing (5). Cinnamon was found to have specifically improved participants’ scores on tasks related to attention, memory, and visual-motor speed.

Cinnamon consumption may also reduce your chances of developing Alzheimer’s. A study conducted to test the possibility of cinnamon to prevent Alzheimer’s disease had shown promising results in preventing the development of tangles (collapsed tau proteins) found in the brain cells that are commonly associated with the disease  (6).

Cinnamon may reduce the risk of heart disease with its ability to improve blood sugar levels, even in people living with diabetes.

A study of people with type 2 diabetes consuming either one, three, or six grams of cinnamon daily found that all three cinnamon groups showed improvements compared to the placebo groups (7).

The cinnamon-consuming group lowered their fasting serum glucose, triglycerides, LDL (“bad”) cholesterol, and total cholesterol. The study concluded that adding cinnamon to the diet of diabetics could reduce their life-threatening risk factors.

Just 120 mg or less than half a teaspoon per day of cinnamon can show these effects and drastically cut the risk of heart disease.

Low-grade inflammation has been emerging as a common underlying cause of many chronic diseases. Type 2 diabetes, heart disease, Alzheimer’s and many types of cancer have all been associated with chronic inflammation.

While inflammation in the body serves an important role to help the body fight infections and repair tissue damage, it can become a problem when it is chronic and directed against the body’s own tissues. 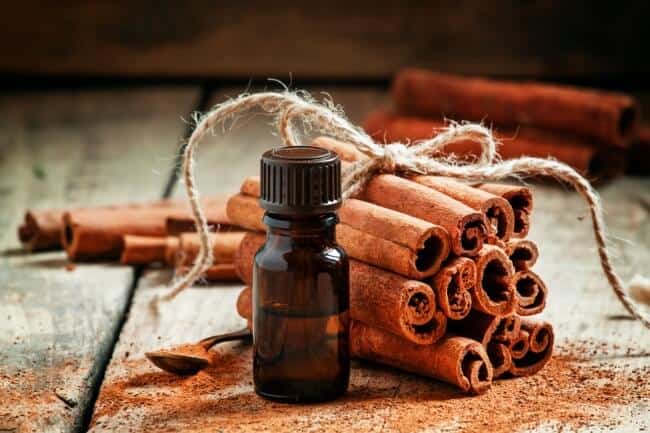 In one study, cinnamon extract not only strongly inhibited tumor cell proliferation in vitro but also induced programmed cell death of tumor cells (9).

The study concluded that further research of active components of cinnamon extract may lead to the development of complementary or alternative treatment of diverse cancers.

Cinnamon extracts have been shown in studies to protect against oral microbes that could cause bad breath, tooth decay, cavities, or gum diseases like gingivitis.

The essential oil from cinnamon has been used to naturally combat bacteria in the mouth and works as a natural anti-bacterial mouthwash. 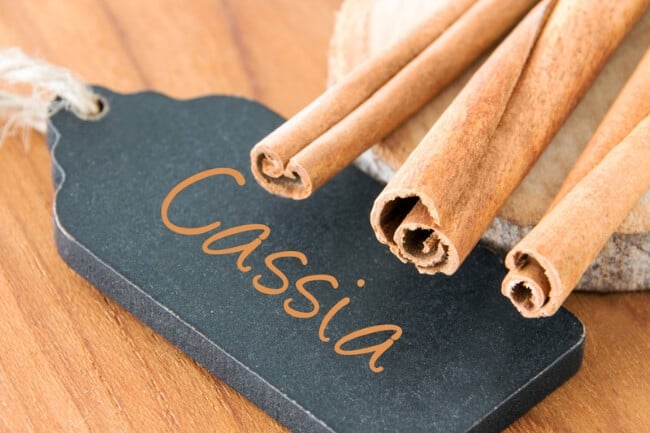 It is important to note that one potential concern with cinnamon is a natural compound called coumarin found in Cassia cinnamon. When consumed at high levels, coumarin can cause liver and kidney damage in susceptible people. This cause for concern was reflected back in 2008 by the European Union’s passing of strict limitations on the amount coumarin allowed in food.

So tempting as the weight loss and health benefits of cinnamon maybe, consuming Cassia cinnamon in moderation would be wise. Alternatively, you can also consume the “true” Ceylon cinnamon, as its coumarin content is insignificant. Mark Sisson of Mark’s Daily Apple recommends using both whiles never straying too far over 1 teaspoon of Cassia per day.

The easiest way to use cinnamon is to sprinkle it onto your coffees, smoothies or breakfast oatmeal. The sweetness of cinnamon can be used to offset the pungent, bitter flavor of turmeric, which you can find in this Turmeric Latte recipe to amplify your weight loss.

If you enjoyed this article on the amazing health benefits of cinnamon and are looking to complement this power spice with a healthy and clean diet, sign up below for a FREE printable clean eating grocery list to take with you on your next shopping trip!