“Would you like to sit down?”, a kind lady on the subway asked, moving her gaze down to gently hint at my bulging belly.

This was not the first time.  My twins were already one-year-olds, and I was not expecting more children. 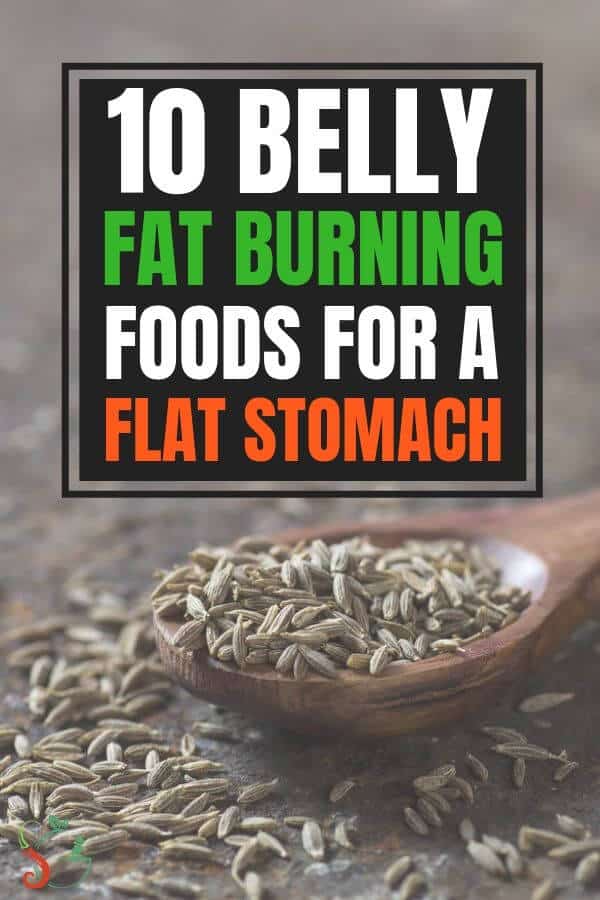 Has this ever happened to you?  Have you ever been mistaken as a pregnant woman when you least expected it?

What if you can melt away that bulging midsection by eating belly fat burning foods, without doing a hundred crunches a day?

Abs are made in the kitchen.

What you eat is much more important than how much you exercise when it comes to losing weight and that pesky belly fat.

Why Belly Fat Is Dangerous

More than a body image issue, belly fat is the most dangerous fat on your body.

Also known as visceral fat, belly fat hangs beneath your abdominal muscles and surrounds your major organs such as the heart and the liver.

These fat cells are metabolically active, and a surplus can cause the body to produce more hormones and chemicals than it needs.

Over time, this leads to increased risks for diseases like diabetes, stroke, and even heart attack.

One way to lose belly fat naturally is to eat foods that burn belly fat.  Another key is to eat clean, which means eating whole foods that are natural, unrefined, and minimally processed.

Want a fast, easy, and effective way to lose weight using fat-burning spices and detoxing greens? Sign up below to get a 5-minute recipe to lose 3 pounds this week!

Here is an evidence-based belly fat burning foods list to help you lose weight fast and get those washboard abs. 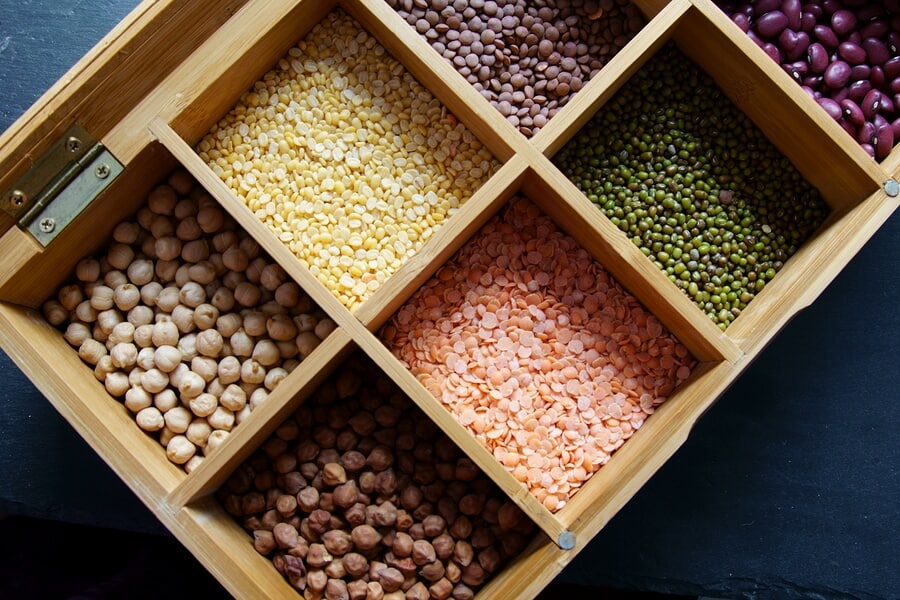 Pulses are the edible seeds of plants in the legume family and include dried beans, dried peas, lentils.  These are superfoods that are good sources of low-fat protein, vitamins (such as folate) and minerals (such as iron and zinc), and exceptionally high fiber.

An 18-month long study that followed human subjects who enjoyed lots of pulses found that they had a greater reduction in waist circumference compared to those who ate little or no pulses in their diet(1).

The group that ate more pulses not only consumed more healthy soluble fiber, vitamins, and minerals but their blood sugar was more stable (due to the lower glycemic index of their meals), preventing insulin from storing more fat around your middle.

Note that no significant difference in weight loss was found between the two groups in the study, so this is helpful if you are looking to lose belly fat without losing overall weight.

Kimchi is a popular Korean side dish made of cabbage, fermented with red pepper and saltwater.  It’s rich in probiotics and antioxidants that provide many health benefits such as enhancing your gut health, boosting the immune system, and even regulating your weight.

Eating high fiber foods like cabbage keeps you feeling full longer.  At the same time, the chili peppers and other spices in kimchi help kick your metabolism into high gear so you can burn unwanted fat.

A clinical study found that human subjects that were given 6mg of capsaicin per day experienced abdominal fat loss and body weight loss without any adverse effects(2).

Yogurts and kefirs are high in protein, rich in calcium and filled with gut-healthy probiotics that can help you lose weight.

Go for the plain variety of these healthy probiotics to avoid added sugar.  You can easily enrich its flavor with a sprinkle of cinnamon, a teaspoon of raw honey or maple syrup, or low-carb fruits like raspberries or strawberries.

You can also further boost your gut health with this supplement that includes the specific probiotic strains to reduce belly fat mentioned above.

Pile on the omega-3-rich wild salmons to your grills or salads this beach season for a slimmer belly.

A study in the journal PLoS One found that participants who added omega-3 fats to their diets significantly reduced their waist circumference, shed more weight – and had an easier time keeping it off than those who didn’t(6).

Fish oil vitamin is also one of the best supplements for weight loss you can take to further boost your omega-3 intake.

Did you know that your pantry may already have some of the best belly fat burning foods to help you get those washboard abs?

Cinnamon is well known for its ability to control blood sugar. High blood sugar levels can cause the body to increase the storage of fat, and cinnamon helps to prevent this increased fat storage and therefore helps you lose weight.

Cinnamon also has the ability to slow down the rate at which the stomach empties into the intestine, so you will feel fuller for longer periods of time and are less likely to overeat, and thus furthering your weight loss efforts.

A study on mice also showed that Cassia cinnamon was particularly effective in reducing abdominal fat(7).

Cumin is another power spice that is often used in traditional Asian medicine and cooking.

Both cinnamon and cumin were power spices that helped me to shed 9 inches off my post twin pregnancy belly without deprivation!

Avocado is rich in monounsaturated and oleic fatty acids that may reduce abdominal fat and decrease the risk factors of weight gain and heart disease.

A study done at Penn State found participants that consumed a diet high in monounsaturated fatty acid had more reduced abdominal obesity compared to those who consumed corn/flax/safflower oil blends(9).

Another study in the journal Diabetes Care also found a diet rich in monounsaturated fat may actually prevent body fat distribution around the belly(10). 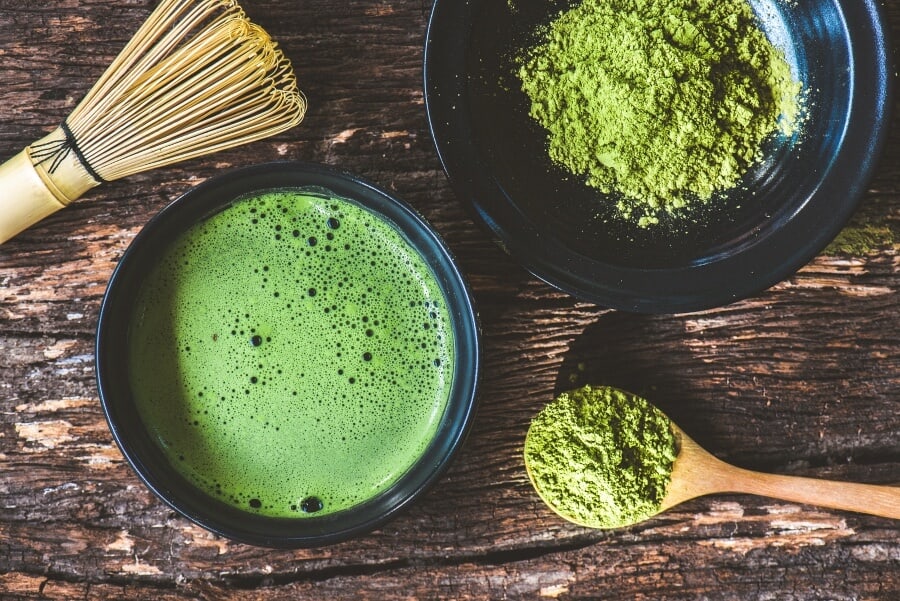 Matcha green tea powder is the best food source of antioxidants known as catechins. When consumed regularly, studies have shown that catechin can reduce body fat and potentially prevent and improve many diseases including obesity(11).

A 2009 study published in the journal Obesity found the consumption of catechin-rich green tea to be effective in reducing weight in moderately overweight subjects, including an over two-inch reduction in their abdominal fat(12).

Load up on green tea before you exercise to get more powerful belly fat burning effects.

Paring tea (without added sugar) with a sweet snack or dessert is a popular practice in Asia that naturally reduces your cravings for sweets and overall consumption of sugar!

Nuts used to be taboo for those of us trying to lose weight due to their high calorie and fat content.

A study published in the Journal of the American Heart Association revealed that consuming 1.5 ounces of almonds daily, along with a heart-healthy diet, helped reduce both LDL (“bad”) cholesterol as well as total cholesterol.  More strikingly, it revealed reduced abdominal fat among participants(13).

An impressive array of apple cider vinegar health benefits have been studied and researched, from improved skin health to digestive health.

The acetic acid found in apple cider vinegar has been shown to reduce abdominal fat accumulation in an animal study(14).

A study on obese human subjects has also found that those who consume 1 -2 tablespoons of apple cider vinegar on a daily basis have a significant decrease in abdominal fat(15). 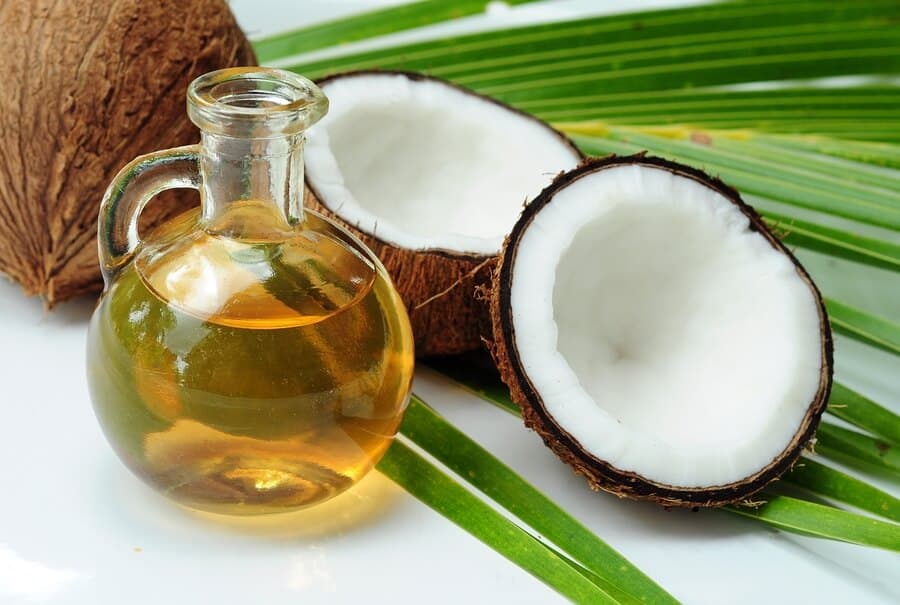 The health benefits of coconut oil have been rather controversial due to its high saturated fat content.  However, its medium-chain-triglycerides (MCTs) are burned as energy – not stored as fat.

A study of a group of female participants who supplemented their diet with two tablespoons of coconut oil daily for 12 weeks resulted in slimmer waistlines than those supplemented with soybean oil(16).  Their HDL (“good”) cholesterol level increased as well.

Another study on male participants found that they lost over an inch of their waist circumference after one month of adding two tablespoons of coconut oil to their diets(17).

Eat these belly fat burning foods as your breakfast, as snacks or make tea, smoothie, or detox water drinks with them!

Would you like to try these belly fat burning foods with a complete system to stop yo-yo dieting and lose weight for the last time? If so, you’ll want to check out my personalized coaching program.

You’ll learn how I lost my first 10 pounds in a month without working out or starving myself, using fat-burning spices and healthy greens that have been used for thousands of years in traditional Asian medicine to maintain a healthy body and weight!

You can click here to apply for my Weight Loss for Working Moms Program.